Ridiculously Photogenic Guy is a Phony

Recently, a photo of a man named Zeddie Little has gained aclaim as Zeddie is apparently running a grueling distance race while still smiling and being photogenic. 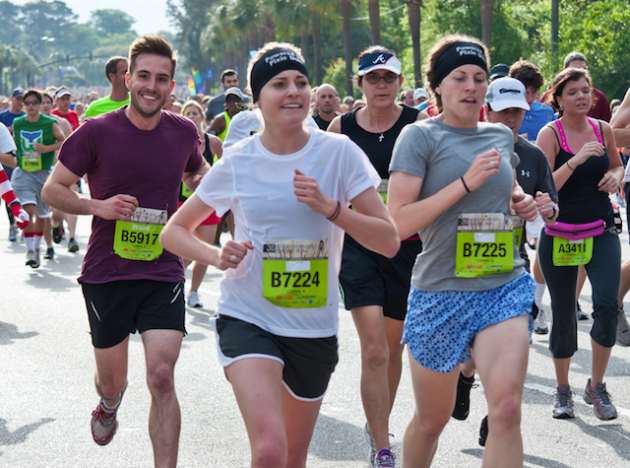 Clearly, if you are in any reasonable shape, it would be easy to run at the pace he is running and be able to smile.  Look at the competition around him.  There is the Atlanta Braves grandma to his left and further to his left is the lady who doesn't know the difference between yoga and running pants and feels the need to wear a fanny pack for a 10k.  If these people looked to be in absolute pain I would maybe give the guy some cred but clearly they are not very competitive people that are just out to take part in and hopefully finish this 10k.  I mean yea, he looks good, but I would be much more impressed if he were running at least 35 minutes at the slowest.  Mike Krsnak can smile at a much faster pace than this man.


Posted by Unknown at 11:23 AM No comments: Links to this post Before I start reviewing the 3.0 V4, I want you to look at my review of the 3.0 V3 found Here.  I will be referencing that shoe and making comparisons.

I really thought that I had liked the 3.0 V3 until I got my ID 3.0 V4s in the mail.  These shoes are immensely better than their predecessor.

Feel: This shoe feels way better than the V3s.  The V3s had foam taken out in certain areas of the sole that gave it an awkward feel.  The V4 has the same low to the ground feel without that same awkward feeling.  It has a groove that runs lengthwise on the sole and that gives the shoe added flexibility as does the grooves in the arch of the foot.  The upper is also much more seamless and you can go barefoot in these shoes if you want to. They also eliminated that stupid mesh patch in the back that always provided durability issues while not adding any benefits.  The toe box feels slightly wider than the last model which is usually a sought after characteristic in minimal shoes.

Durability: The durability of these shoes is yet to be seen.  The uppers seem reinforced enough to last awhile, certainly more than the last models of 3.0.  The foam is the same as other Nike foams lately and I might have issues with that foam wearing away too quickly.

Look: I always like the looks of the Frees so I probably won't say too much negatively.  I guess they could add new colorways.  The initial ones are rather plain and usually don't have two colors represented very much.  One color dominates most of the time.  I do like that the sole and midsole are not just white or black on a few models.

Uses:  This version of the free has pretty decent lockdown so it could be used to faster sessions as well as everyday running.  Something I will never recommend for any types of frees, except the Free Trails from about 8 years ago, is trail running.

Overall, I really like this version of the 3.0.  It is the first to eliminate the gaps in the foam on the midsole that made those shoes slightly uncomfortable.  I never realized how uncomfortable until I wore these shoes.  These shoes would be a great step in transitioning from a traditional trainer into a minimalist one.
Posted by Unknown at 11:07 AM 23 comments: Links to this post

Boom!  That should be the real title of this blog post.  This shoe is amazing.  As many of you who know me outside of my blogging know that I am a fan of Nike Frees.  I was going to say advocate but I don't really want to promote Frees to everybody because every runner is different.  Some, like Paul Przybelski, prefer the Asics Gel to any other support technology and I myself prefer a simple layer of foam.  Many people with fairly neutral strides can wear shoes like the Nike Free while others prefer something more minimal and others still need something more cushioned like the Nike Lunareclipse or something with a technology to keep them from pronating like the Nike Structure or Lunarglide.

Now, I'm going to get into the review portion.

Feel:  These things probably feel the best out of any of the Nike Frees.  They are in a battle with the 5.0 V4 of which I still have a pair that serve as my go-to long run shoe.  I felt like the last two models of Nike Free had gone away from the somewhat minimalist trainer and went to a fashion shoe.  I am going to highlight a few things that I like about these so far.  First, they have a tongue!  It make the shoe easier to get on without sacrificing any comfort.  Second, the upper is much lighter that the last two pairs.  It is also very breathable.  I think it will still last a long time unlike a few models of the Free 5.0.  Third, it is an overall smoother ride than past models.  I think it has to do with the grooves in the arch and the fact that the grooves aren't as spaced out.  The shoes are still as flexible as any in the Free line but they feel much better.  Fourth, the nearly seamless insides are very comfortable with or without socks.  Fifth, Nike incorporated the Dynamic lockdown seen in other shoes and it works well if you like your shoes tied tight.  I personally like mine fairly loose.

Durability:  I have reservations about the quality of material Nike is currently using in their sole but other than that I don't think durability should be an issue.  The upper appears and feels to be very strong and I wouldn't be surprised to see these shoes last 2,000 or more miles.

Looks: Like I said before, this shoe is less of a fashion shoe than the Run+ 2 but I think this shoe is still awesome!  For now, all the colors are mainly a one-color scheme but later releases will change that.  I also like the reflective swoosh on most colors, it looks cool and is functional too!  I also like the slimmed down appearance of the midsole on these shoes.

Overall:  Thanks to Nike for making their shoe functional instead of fashionable.  I was worried after the Run+ 2.  I look forward to running in these shoes for a long time to come.