Altitude Lessons for a Sea-Level Dude

I recently visited Southern Wyoming and Northern Colorado.  The minimum elevation there is still over 5000 feet and it reaches well above 10000 feet up into the mountains.  I have had limited experience running at altitude so I thought I would share what I learned in my recent experiences.

1. Hydrate!  This is a key when you are running anywhere but it is especially relevant at altitude.  You become dehydrated faster at higher altitudes and need to drink more water to stay hydrated.

2. Start out slow.  This refers to individual runs and blocks of training as a whole.  A run or week is much easier if you take it slow at the start

3.  Be wary of inclines.  If you don't like hills at sea-level don't try them at altitude.

4. Keep your head up and don't look at your watch.  You're going to be running slower at the same amount of effort but don't worry about it.  Just run and have fun.

5. Recovery will take longer.  If you have a workout or race, plan extra time to recover from it.  It will also be harder to complete doubles in track meet successfully at altitude.

That's about all I have regarding altitude.  Check back soon for my review of Fort Collins' Foothills Trail!  Thanks for reading! 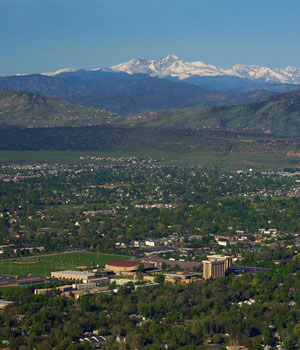 Posted by Unknown at 11:48 PM No comments: Links to this post

I've been hearing many people say that Haile should retire.  I think that they should let Haile do what he wants. The man is still a 2:08 marathoner.  Should every American retire because they can't run that fast?  Haile should no longer expect to be "The Greatest" anymore but he is still a great runner who can attract a crowd and put up results.  Who would you rather go to a race to watch, the former multiple world record holder, Olympic Gold medalist, World Champion, or another random Kenyan who is going to run the same time as Haile.  Haile is definitely not at his peak but he is still among the best distance runners in the world.  Haile, if you ever read this, run as long as your heart desires.  You have had an amazing career and still can drill anyone that I know at the marathon distance.  Keep your head up and don't listen to the haters. Posted by Unknown at 10:10 PM No comments: Links to this post

Today I ran my second run in my new Skechers GoRuns.  My first run was only 1 mile and was on a synthetic surface so the shoes have 9 miles on them total.  Here is my report thus far:

Retail Price: $80, very reasonable in today's running shoe market
Weight: 6.7 oz, very good for a trainer.  Lighter than some flats.
Heel Drop: 4mm, an optimal one for me.  Others prefer 0.

Feel: Wow. These shoes are very light.  When running, you can't hear your footsteps due to the softness of the foam on the sole.  These shoes are definitely not for heelstriking.  If you do, it feels uncomfortable.  If you run how these shoes are designed it is very comfortable and supportive.  They say you can run without socks and I see how that is possible.  The insides are soft and seamless and your foot doesn't move around very much inside the shoe.  The toe box is about perfect width.  Not too tight or too loose.  I have slightly wide feet.

Looks: Other than the sides, the shoes look good.  The sides make them look like a pair of shoes you would pick up at Wal-Mart.  They come in a variety of colors.  The mid-sole looks closer to a Nike Free than a ReeZig which is good.

Durability: This is where this shoe will take a hit in my rankings.  After the first run, the foam on the toe was visibly wearing away.  The problem is the materials and the fact that these shoes don't have a sole.  It goes straight from the midsole to the ground.  I also have doubts about the upper.  I don't see these shoes lasting more than 300 miles. If I was wearing these for every run I would go through them in less than a month.  That just isn't economically viable.  Especially when I have put over 2000 miles on a pair of Nike Frees.

Uses: These shoes are very light and seem to be quite versatile.  I can see them being used as a flat or even a road racing shoe.  They weigh less than the Nike Marathoners and similar to the Lunarracers.  I will probably use them for morning runs and shorter runs to prolong their life.

Overall: They got the right idea but went wrong in the construction and materials.  They might have sacrificed to save money, weight or both.

3/26 Update: I have worn these things a few times and they hurt my fascia every time I wear them.  I have never had fascia problems otherwise.  They still feel great while wearing them but during my next run they hurt.

Posted by Unknown at 6:51 PM No comments: Links to this post

I had a Scheels gift card recently and I didn't know what to get.  I already have about 19 pairs of shoes and too many pairs of tights, tops, and running shorts so I decided to do a bit of experimentation.  I will be competing in the Deadwood Mickelson Trail Marathon in June.  It is a smaller marathon so I assume the choice of food at the aid tables won't be perfect or predictable so I'm going to take that out of the equation.  I purchased a few different gels, and other energy supplements to try out in the upcoming months and hopefully find one that works wonders so I can run super fast in my marathon.  Here's what I got:

I am going to begin experimenting with these energy supplements during long runs and workouts.  So far, I have tried a few and reports on those will be coming out soon.  I have found some that seem to work and others that seem to make me feel sick.  Like every other aspect of running, this factor is on an individual basis.  What works for me may not work for you so try many options to find the optimal one.

Posted by Unknown at 10:32 PM No comments: Links to this post

I just got my Skechers GoRuns in the mail today.  Here are my first impressions:

2. That bag thing that is also in there is weird.

3. I like the information packet that comes with them.  It classifies them between a "Extreme Barefoot Shoe" and a "Traditional Shoe".  I think that most of my training shoes fall in that range.  It also says the GoRuns have a heel drop of 4mm.  One thing that bothers me about the packet is the cover.  The female model appears to be greatly overstriding and therefore setting herself up for a big heel strike, something the packet later condemns.

4. They are really light.  Even lighter than my frees by a few ounces.

5. Are they going to be durable?  The foam doesn't seem like it will last that long and the upper has to be somewhat compromising for being that light.  More to come in the review later.

6. They look pretty good.  The sides with the logos are pretty tacky.  I got the orange and gray color above.

7. Skechers could make it in the running shoe industry but they should probably get more models of shoes.  A racer like Meb's would be legit.

8. They feel weird walking but pretty good when running with the proper stride.

9. I am going to try with and without socks.

Look for a full review after I have taken these shoes out for a few runs!  I am impressed so far but I still have some doubts that will have to be debunked on the roads.

Posted by Unknown at 1:57 PM 3 comments: Links to this post

2005- Kerron Clement of the University of Florida set a new Indoor World Record at the NCAA championships for the 400 meters.  Kerron's time of 44.57 beat all-time great Michael Johnson's previous record by .06 seconds.  Clement was born in Trinidad and Tobago and now represents the USA.  He is a 400m hurdles specialist and was the World Champion in 2007 and 2009 with a silver at the Olympics between those years.

Posted by Unknown at 1:43 PM No comments: Links to this post

This Day In Running- March 11th

2005- Wallace Spearmon sets the American Record in the Indoor 200 meters in Fayetteville, Arkansas.  All of Spearmon's indoor bests from the 60 to 400 come at his alma mater, Arkansas.  Wallace's 200 time is tied for second all-time behind Frankie Fredericks of Namibia.

Posted by Unknown at 8:04 PM No comments: Links to this post

Cam Levins of Southern Utah placed 3rd in the 3000m and 4th in the 5000m.  Both finishes garner him All-American status to go with his 4th place finish at NCAA Cross Country.  Cam also set a personal best, indoors or out, in the 5000 with a time of 13:38 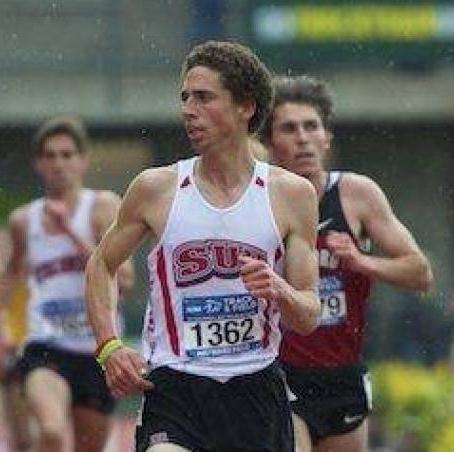 Jack Whitt of Oral Roberts finished in third place with a vault of just over 18 feet.  This is Jack's fourth All-American Honor in the Pole Vault.

Leslie Brost, a Watertown native and NDSU athlete, placed 4th in the women's Pole Vault.  She improved her personal best by 5 cm to 4.35m.

Clive Chafausipo, also of Oral Roberts, placed 6th in the Long Jump with a leap of 25-7.  Clive defeated Jared Vlastuin of SDSU by 1 cm at the Summit League.  This performance was essentially his best ever because his outdoor best is wind aided.

Mary Wirth, SDSU- Mary nearly qualified for the final round of the NCAA Outdoor Championships last spring after a strong performance at Regionals.

Travis Fitzke, NDSU- Fitzke will have to make a big jump going into his 5th year but it is within reach.

Ashlynn Simon, NDSU- Simon was only 4 seconds off the Auto-Q time and is only a redshirt freshmen.

Deborah John, NDSU- John dominated the hurdles in the Summit League all year and has the best time by .2 seconds.

SDSU and NDSU DMR- Both teams will have the fire power to run a fast DMR next year.  The right race could see one of these teams make it.

Jamario Taylor, Western Illinois- Jamario is over 7 feet in the high jump and is only 10 cm from the auto qualifer as a sophomore.

Kyle Ballew, South Dakota- Ballew is overshadowed by Jack Whitt but he is still fairly close to qualifying and has two year to get there.

Emily Grove, South Dakota- Derek Miles has been good at recruiting and coaching Vaulters.  Grove was only 7 inches behind Brost as a true freshman.

Shot Putters, South Dakota- McKelvey and Snyder were ranked 1 and 2 in the Summit as Freshman.  If they get stronger they could qualify.

Posted by Unknown at 2:43 PM No comments: Links to this post